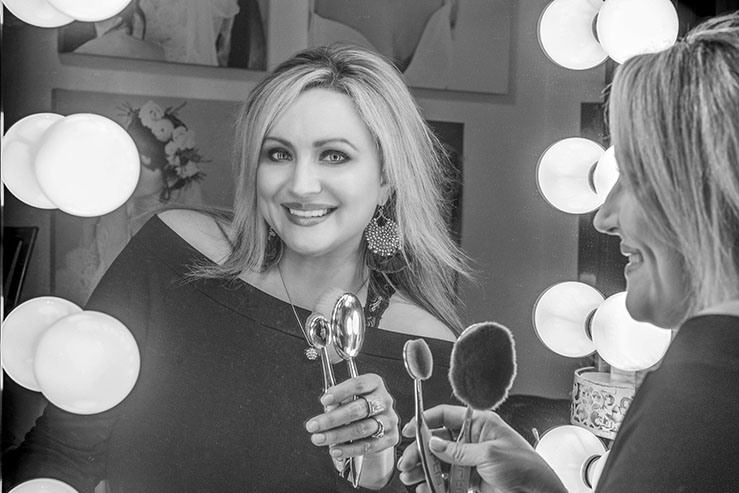 Ashlee Rice was born and raised in Dallas, TX where her career in the beauty industry later began in 1999. She attended college prep boarding school all 4 years of high school outside Kansas City, MO. She was a theater major at the historic William Inge theater school in Independence, Kansas, where courses in Stage Makeup really blossomed into a desire to become a professional makeup artist.

Ashlee has traveled as a regional makeup artist for Lancome and Estee Lauder, working alongside Premier Makeup Artists for national makeup events for Foley's, Macy's, Dillards, Saks, Nordstrom and Neimans. She worked in Trademarks and R&D for TIGI Bed Head haircare and makeup learning how to make the most innovative hair products of the time. She also designed TIGI’s limited edition makeup collections, brushes, and revamped their existing makeup line. Her first cover was for Easy Rider magazine in 2006.

After moving west to Midland, TX as the new business manager for Estee Lauder, she then became the onsite MUA for luxury women's boutique Julian Gold, working with such lines such as Paula Dorf, Darphin, La Prairie, Lancôme, and eventually helped introduce Jane Iredale into the cosmetic department.

In 2008, she launched her very own Let’s Face It Makeup Studio with a primary focus on using only non-toxic jane iredale makeup and healthy skincare alternatives, while setting herself apart by bringing a new 'face' to makeup artistry by featuring custom makeup lessons, fantasy makeup, costuming collaborations and eventually underwater mermaid photoshoots.

In 2009 the MRT featured her Halloween fantasy makeup on the cover of their Lifestyles section. In 2012, her underwater makeup was featured at an Allure magazine event for Jane Iredale in NYC. Ashlee then made it to the top 5 for RAW Makeup Artist of the Year Austin, TX 2013.

Since, then, she has been awarded the 2014, 2015, and 2016 Best of Weddings by the Knot. Her makeup has been in broadcast and commercial work on documentaries about the oil industry, national television broadcast series such as 48 Hours and for other true crime reporters. Ashlee was also the assistant MUA to Kandy Glass for Austin Fashion Week, and coordinated the backstage makeup team for designers and Project Runway All-Star night 2015. Her makeup work has been used and featured for bridal editorials with Kayla Barker, Style Me Pretty, My Weddings Texas, The Knot, the historic Gage Hotel, and Society Texas. She has worked with recording artists such as Le Sorelle, Aaron Watson and Abi Music.

Ashlee specializes in fantasy costume design and makeup with innovative ideas such as her famous “Grinch". She has designed underwater shoots that have been used for print and advertising. One of her Halloween looks was featured by Pop Sugar Australia as a top 17 scary costume look for women in 2017. She has contributed to news articles, and media outlets multiple times over the last decade featuring beauty tips and even an awesome story on “underwater mermaid” photoshoots. She also travels to Atlanta for designer Dianaira’s fall and spring collections.

She is currently the West Texas regional makeup artist for jane iredale the skincare makeup, and sells the pharmaceutical grade mineral line at her makeup studio. Ashlee is also an Artisan Affiliate for the luxury brand Artis Brush. She specializes in makeup for bridal, boudoir, underwater, special occasion, fashion, editorial, HD broadcast, and Halloween special fx/costuming, as well as, art direction/design for photoshoots, and is even self taught at hand painted body art.

In 2019, she joined JK Dance Center as the new Assistant Creative Director along side professional dancer Kelsey Bourg Tanner. Ashlee continues to travel for destination projects and weddings, while she works with her base of clients in West Texas. She is married with two children. She is currently working on her first Fiction novel under a pen name, and also writes for her makeup blog "You Can't Make This Up".

"Ashlee did my wedding makeup along with my bridesmaids and did a fantastic job! Her personality is kind, bubbly, and just the perfect person you want to spend several hours with on your wedding day. She listened to all of my wishes and made me feel beautiful as I walked down the aisle. I recommend her to anyone for wedding day makeup and more!"

"Ashlee introduced me to Jane Iredale almost 10 years ago and I use it daily . Ashlee is fun, creative, knowledgeable, professional and a pleasure to work with! Ashlee is the best make up artist !"

"Going to Ashlee is a complete experience. She doesn't just apply makeup, she will touch your life! Her knowledge in makeup is beyond most other MUA in West Texas. She is amazing at giving makeup tutorials as well. An appointment with Ashlee is like going to Disneyland, full of fun & magic!"

"Ashlee has been helping me with my make up addiction for almost 10 years. It started with my wedding make up and has progressed into a friendship. I leave her chair feeling beautiful everytime, but also relaxed and happy because her chair is always a safe place to vent or laugh about anything. She has also created another Jane Junkie in my daughter who has been getting "lips" in Ash's chair since she could talk. Love you sweet lady!!!"

"Ashlee is AMAZING! Working in the Law Enforcement field for 15 years, you don't always get to be a girly girl-I had the AMAZING opportunity to meet Ashlee several years ago for a photo shoot I did for a friend's Airbrush Tanning business and Ashlee made me yes ME! Feel beautiful!!! She's a God fearing woman and Top notch in her field! I'm always in awe of her work!!!"

"Knowledge, professional, creativity, inspiring, and fun ... those are only a few word that describe Ashlee. Everyday I wear Jane Iredale makeup my face feel healthy and youthful. Whether it is just learning a fresh approach to makeup or make for a special occasion Ashlee is your go to Fairy God Sister."